6-Dec-11 – Famous radio personalities and programs now have a place at which to be remembered, even when they go to that great radio station in the sky. The National Radio Hall of Fame Gallery opened to the public last Thursday at the Museum of Broadcast Communications, next door to Marina City.

Mary Heppner of Chicago and Diane Bowman of St. Claire Shores, Michigan, were the first visitors, according to a news release.

There are now 173 inductees in the hall of fame, each with a poster displayed in the gallery. The Class of 2011 includes former sportscaster/president Ronald Reagan (1911-2004), Graham McNamee (1888-1942), a radio pioneer of the 1920s, news commentator H. V. Kaltenborn (1878-1965), and radio classics Gangbusters, The Great Gildersleeve, WLS National Barn Dance, and Suspense.

“Computer touch screens provide instant access to audio clips of radio’s best performers of all time,” entices the news release. “Display cases are filled with radio memorabilia and Charlie McCarthy is looking spiffy in his special place of honor.”

The museum is currently working on completing a radio studio, media control room, and an expanded education center.

Admission to the museum, located at 360 North State Street, is $5 for adults, $3 for children under 18, and free for visitors younger than age ten.

On December 3, about 100 people attended the museum’s Salute to Roy Leonard (below), the former WGN radio personality. 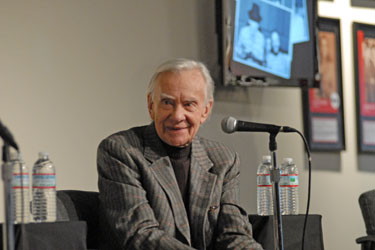