Since 1998, the city’s Lights Out Chicago program has encouraged building managers in the Loop to modify their lighting during migrations. They are asked to turn off all exterior and decorative lighting from 11 p.m. to sunrise, and minimize interior and lobby lighting.

According to Prince, all of the major buildings in downtown Chicago were 100 percent compliant in 2004.

“We know that thousands of bird lives have been saved by this simple act of extinguishing unnecessary lighting,” she says. “Light reduction for darker skies benefits energy saving, human health, and bird welfare.”

If you have a plant by a window in your high-rise apartment, a bird may consider it a great place to land and rest, but will never imagine the glass in front of it. All you need to do is close a blind, Prince recommends.

“The hope of any bird-safe building is to minimize the appearance of a giant piece of glass.”

Architects today are using innovative building designs that eliminate the appearance of large, uninterrupted surfaces of transparent or reflective glass by creating “visual noise,” or a noticeable surface area into which birds are less likely to fly. An example of this is the Aqua tower by Studio Gang Architects. 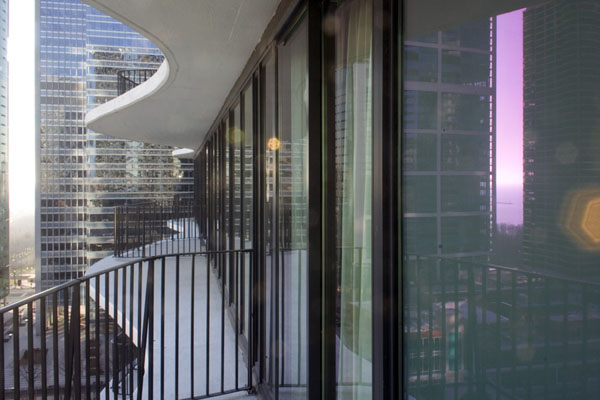 (Above) Balconies on east side of Aqua. Photo by Steven Dahlman.

Hundreds of birds killed, injured on one day alone

Birds of a feather flock together, especially during migration, but a significant weather phenomenon will make them stop their journey and hunker down to wait it out. Sometimes migrations will stack up like jets over O’Hare, and when the weather clears, huge flocks will hit the sky together, creating a perfect feathered storm, which is what happened one day early this spring.

“We had 400 dead and 400 injured that day,” recalls CBCM monitor Ruth Kurczewski. “It started at sunrise. Suddenly, people were yelling, ‘There’s one, there’s one over there! There’s another one!’ It was mayhem. The exhausted volunteers were still finding birds at sunset.”

The worst part, says Prince, is that the best members of the species are indiscriminately taken down.

“In natural selection, the weak or injured are eliminated and the strong survive to procreate the species. But collisions with glass often kill the strongest, most valuable birds.”